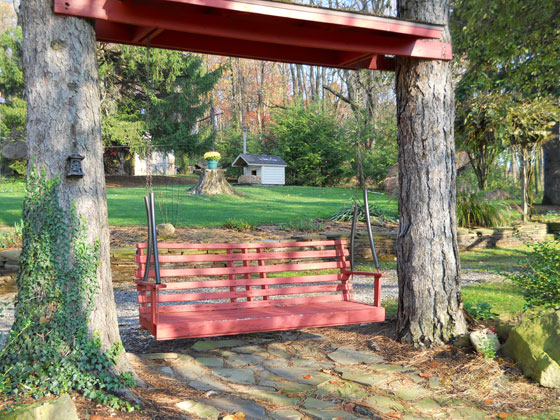 The History of the Red Swing

The Red Swing is an actual swing.  It is the porch-style swing built years before Red Swing Group’s owner, Matthew Smith, was born, by his late Grandfather, Kenneth Smith, with white oak from the family farm in Jefferson County.  Matthew recalls many ever-powerful talks with “Grand-Pap” on that swing that had the far-reaching panoramic vista of several mountain tops.  A vista that allowed the enjoyment of firework displays on the Fourth of July from towns miles away.

Unknowingly during many of those summer night talks, Matthew was being instilled with the Smith family values on the Red Swing. The same values that are the foundation of his personal and business life; “do a person right”, have honor in your work, show integrity, be ethical, think smart, and spend wisely.  What Matthew learned is the development of a trustworthy relationship is the basis that will allow you to succeed in life and business.  These core values he was raised early on in his life are the premise of Matthew forming Red Swing and what precipitated the start for a successful company.

Matthew now owns the Red Swing that has so much meaning of life to him.  It is hung between two trees on his property along with the addition of a cupola built over it for protection from the weather.  The area is lined with flagstone, landscaping, and has a similar vista of its origination, however not as vast, but just as meaningful and tranquil.

The Inception of Red Swing Group

In January 2009, after working 20 years for a variety of engineering firms, from the small single-office local, to the large multi-office international firms, Red Swing Consulting Services, LLC was formed in the home office of Matthew Smith.  The Red Swing Group, as the overall name of the company is recognized as, was started due to the downturn of the economy in 2008.  The formation of his own company was always an ambition of Matthew, but it was the sudden and unexpected loss of his job, and the need to support his family, that expedited the creation of The Red Swing Group.

Red Swing Group commenced with a couple of projects on the first business day of 2009.  It has strategically added staff as more projects were won or repeat business from existing Clients came online.  In synchronization, as the work volume grew, so did the staff to the point that it necessitated the need for an office, which was opened in the summer of 2011 in Murrysville, PA.  As of the onset of 2012, Red Swing has established a full complementary staff from Administration through Project Management to completely support its projects and fulfill the needs of the Client.  Red Swing is cognizant of its workload and manages its ability to successfully support a project from Concept Planning through Close-Out.  In fact, Red Swing has declined work, or not pursued opportunities when potential overload was evident.

The near future business plan for Red Swing is to maintain its controlled growth, build upon its existing and new business relationships, provide an exceptional level of service, and ultimately create a highly desirable environment for its staff and Clients that will precipitate the foundation of Red Swing, of “…doing a person right” to make all associated, proud to be a part of Red Swing.